Ross Barbera
Born and raised in Brooklyn, New York, in the 1950s, the landscape painter Ross Barbera grew up in the energy of The City but spent his summers at his family's homes in Smithtown on Long Island and the sleepy town of Peakville in upstate New York. It was during those summers that he discovered the world of the natural landscape, and it’s proven to be the inspiration for his art ever since.  But a visit to Barbera’s website--www.rossbarbera.com--shows that there’s also a rich variety including portraits and beautifully wrought quilts. Irecently sat down with Ross to discuss his work. 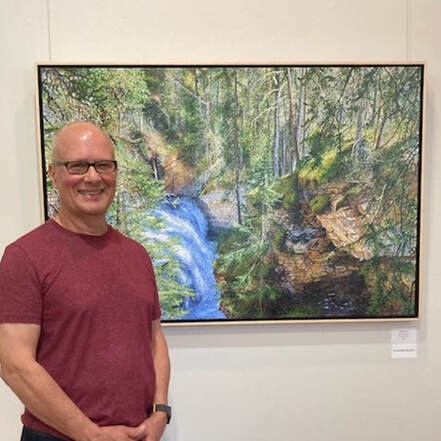 Opening reception for group show at the Mills Pond Gallery, June, 2021
BT:  I’m familiar with some of your early work, done when you were an undergraduate at St. John’s University in Jamaica, NY.  How is that work different from what you were to do for much of the rest of your career?

As an undergraduate student, I experimented with both realism and abstraction. By junior year of college my artistic identity began to solidify, and I had decided on the direction for my senior thesis. My undergraduate thesis paintings were airbrushed abstractions, suggestive of imaginary landscape environments. I called these paintings “Mindscapes.” During the summer of 1973 having graduated from St. John’s University, and having spent a significant amount of time photographing, painting, and drawing in upstate New York, my close-up observations of freshwater pond and stream surfaces led me to discover similarities between these surfaces and my abstract paintings.  Becoming fascinated with closeup views of freshwater surfaces, it was during this summer that my work transitioned from abstraction to realistic landscape painting.
​
By the time I entered graduate school in the fall of 1973, water surfaces had become my primary subject to paint. For my MFA thesis in 1975, I produced a series of large representational paintings capturing closeup views of still pond surfaces. That fall I had my first solo exhibition at Razor Gallery in SoHo, NYC, and this show featured my large waterscape paintings.
BT:  A great deal of that early canvas work uses air brush; is that still the case?

RB:
The use of an airbrush was critical to my early paintings primarily because I wished to eliminate visible brushstrokes and create painted surfaces characterized by smooth modulations of color and form. The airbrush was the perfect tool to achieve this. “American Artist Magazine” featured my freehand airbrush painting methods in an article sometime during the 1980s.

​By the late1980s I realized that painting in oils with an airbrush had the potential to create significant health issues, so I abandoned the airbrush and started painting with traditional paint brushes. Around that time, I also switched from oils to acrylics to eliminate toxic solvents from my studio. The transition from the airbrush and oil paints to traditional paintbrushes and acrylics was a difficult time for me. This was an abrupt switch at a time when I was actively working on paintings for several solo exhibitions. In midstream I needed to reinvent myself as a painter. Most challenging was the transition from airbrushed surfaces with a photographic look, to painterly surfaces in which individual brushstrokes remained distinct.
BT:  You eventually taught at St. John’s, ultimately becoming the chair of the Fine Arts Department.  Did your work as a professor and administrator affect or influence your work as an artist?

RB:​
The two were so entwined, I’m not sure what influenced what. It is clear to me that during the early part of my college teaching career, I developed an appreciation for Art History, and I began to see the individual practicing artist not as an isolated entity, but as part of a much larger historical tapestry.

I do see an influence that my work as an educator had on my jewelry. At Pratt Institute I received a Master’s in painting, with a Minor in Jewelry Design. From the mid-1970s to mid-1980s I created original sterling silver jewelry that incorporated enamels. By the late 80s I had transitioned away from sterling silver jewelry to non-traditional materials that aligned more closely with painting and included paper. By the late 1980s I had developed a technique in which I made jewelry from built up layers of 140lb watercolor paper. Sometime during the early 1990s I created a jewelry design course for St. John’s University. The course was structured around my non-traditional methods of jewelry making. The course became very popular, and I taught it on a regular basis until I retired in 2020. Teaching multiple sections of this course every semester and working closely with students on independent jewelry projects provided me with a 25-year opportunity to explore and develop non-traditional jewelry fabrication processes. It also inspired me to create a video series that is featured in my YouTube channel "RealisticArt." I still occasionally exhibit jewelry alongside my paintings.
BT:
Many people also know you as the producer of some wonderful jewelry—and as the creator of RealisticArt, a YouTube channel that presents numerous videos about watercolor painting and jewelry-making. Is YouTube channel and your jewelry still an aspect of your creativity?

RB:
To date, my YouTube channel “RealilisticArt” hosts more than 100 self-authored videos dedicated to Jewelry Design and Watercolor Painting. I suspended video production about four years ago to concentrate more fully on painting. Video production is labor intensive and cut significantly into my available painting time. But now that I have retired from full time teaching, I plan to start work on a new video series exploring recent developments in my methods for constructing paper jewelry and will also be introducing a new series on Acrylic Painting.
​
Jewelry continues to be part of my creative output, and I have been concentrating on making watercolor paper pendants. I think of my pendants as wearable, miniature shaped canvases. Recently I was shocked upon discovering long forgotten shaped canvas paintings in my mother's closet that I produced as an undergraduate student at St. John's University. How similar they are to my watercolor paper pendants!
BT:  Much of your work on canvas--even your early work from the 1970s--not to mention your recent quilt work done with your wife Bonnie--is very large in scale; indeed, three feet by four feet is an average.  Talk about that.  For you, is bigger better?  Why aren’t there Barbera miniatures?

Why the large scale? Scale is a fundamental compositional consideration. Large scale paintings alter the viewing space of a room, impacting on its visual environment. When someone walks into a room, I want my painting to reach out and invite them for a closer look. My intent is to build painted surfaces that are satisfying to look at not only from a distance, but upon close examination, and reveal a microcosm of fascinating brush strokes. I remember my first solo exhibition at Razor Gallery in SoHo. For that exhibition I produced a series of 72” x 72” canvases depicting close up views of water surfaces. People came into the gallery to look at my paintings simply because they happened to be walking down West Broadway and were attracted by what they saw from outside!
​In addition to my large work, I also produce small acrylic and watercolor paintings. The small pieces provide relief from my labor-intensive large canvases and give me an opportunity to experiment with a range of ideas in a relatively short period of time.
​BT:  And final————————late, great James Lipton, who always ended his interviews on The Actor’s Studio with his now-famous Ten Questions, I’d love to hear your “top-of-the-head” responses to those questions--and if you choose, an explanation.  The first one is:

BT: What turns you on?
RB: Early Morning

BT: What turns you off?
RB: Bad Coffee

BT: What sound or noise do you love?
RB: Blowing Snow

BT: What sound or noise do you hate?
RB: Buzzing of a mosquito

BT: What profession other than your own would you like to attempt?
RB: Jazz Drummer

BT: What profession would you not like to do?
RB: Dental Hygienist

BT: If heaven exists, what would you like to hear God say when you arrive at the Pearly Gates?
RB: What took you so long! 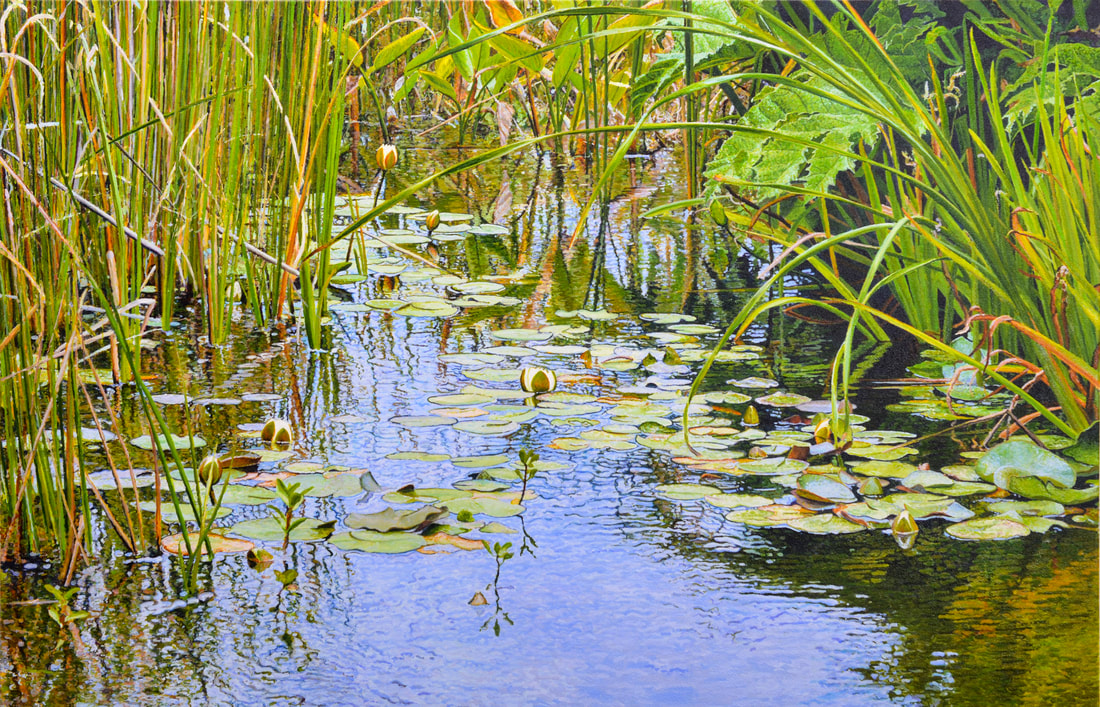